The trail leads to the squalid but charismatic Titus Oates, whose accusations take in every eminent Catholic, including James and Queen Catharine herself. In the atmosphere of panic, a witch-hunt ensues and Charles is powerless to save the many innocent people whose lives are blighted by Oates's lies. Charles's position is further weakened when Parliament obtains letters alluding to the treaties with France. As Shaftesbury pushes for the exclusion of James as Charles's heir, Charles responds by sending Monmouth, the Protestant candidate, abroad. Charles dissolves Parliament to rule as an absolute Monarch and asserts James's right to the Throne, exiling Monmouth permanently. Charles lives out the final years of his reign in relative peace, yet he is profoundly conscious of the chaos that will ensue after his death. In a prescient moment, he advises William of Orange to prepare himself; both Monmouth and James will try and fail to rule England. In a final, ironic gesture, Charles rep 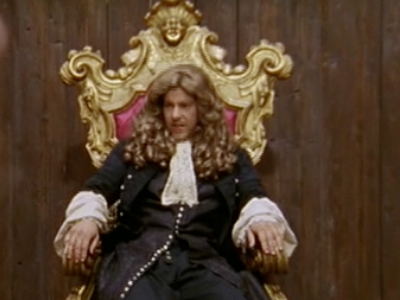