Bobo White is charging around the skygarden on Skydonk and accidentally crashes into Baba Green's prized fluffigold flowers. The flowers send up a great deal of pollen into the air which forms a yellow cloud. Fuffa is intrigued by this new visitor and tries to make friends with it. However the yellow cloud is unresponsive, and wherever the yellow cloud goes, the Cloudbabies all start to sneeze. No one can work out where these sneezes have come from. Baba Blue, sneezing profusely, visits each Cloudbaby in turn for advice on how to stop these sneezes but with the yellow cloud following closely behind, the sneezing just spreads to everyone. Fuffa is most suspicious but is frowned on by the Cloudbabies when she voices her concerns. They think she is just being mean to the yellow cloud. It is only when Fuffa traces the pollen back to the fluffigold flowers that she is believed. She tries to blow the yellow cloud of pollen away but she is too small to do it. 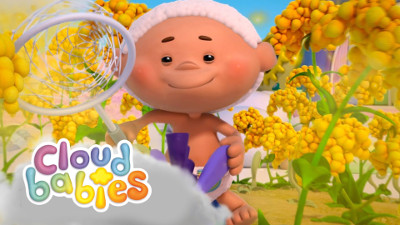