Facing a lack of funds, Principal Li accepts a generous sum of money from a soda company, in exchange for letting them promote and advertise their product on campus. Daria has a problem with the fact that the school is being used in this manner, however, everybody--the school superintendent included-feels she has no right to complain since the arrangement is bringing the school the money it needs. Unfortunately, Ms. Li fails to meet the profit quota the soda company requires, and is forced to increase promotion of the product, to the point of including it in athletic uniforms and lesson plans. Ultimately the effort to amend the situation proves too much for her, and the soda company is forced to pull out of the deal (though it still leaves its logo in several strategically placed areas). 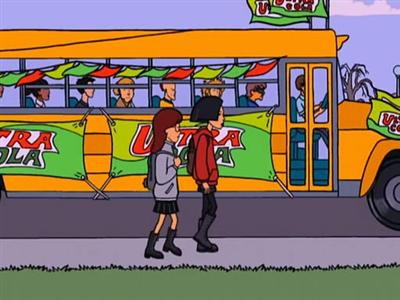