As the six-month anniversary of Daria and Tom's relationship approaches, Daria starts to feel like Tom is taking her for granted, since they never go out on dates or do anything romantic, like Tom did with Jane. She can't get herself to bring up the issue with Tom, but she talks to Helen about it, and Helen advises her not to expect too much or else she'll be disappointed. She realizes that though Tom didn't realize that the anniversary was approaching, neither did she at first (Quinn had to remind her). Additionally, Tom explains that he's not the romantic type--he did the romantic stuff with Jane only when he sensed their relationship was falling apart. The two of them decide to celebrate their anniversary even though they really don't have to. Meanwhile, Jake joins the staff of an internet start-up company. He is twice the age of the other employees, and never quite figures out what they're saying (they speak in buzz-words and techno-jargon) or what the company actually does. Though 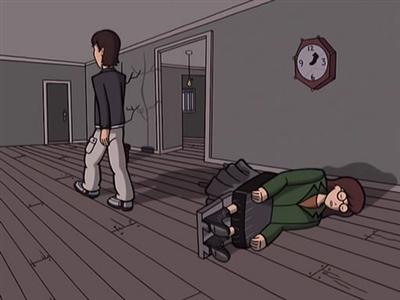