One J at a Time

Helen encourages Daria to invite Tom over for dinner, but Daria is reluctant to do so because she fears Jake's erratic behavior will embarrass everyone, especially after he starts obsessing over catching a squirrel that's been knocking over his garbage cans. Helen tells her that she will try to control Jake if Daria invites Tom over. Quinn, meanwhile, decides to find one boy to date exclusively, to show that she is mature enough to do so. Her detailed search for the lucky guy is based entirely on fashion sense, and it's ultimately narrowed down to Jamie, Jeffy and Joey. However, Daria starts playing with her mind and giving her unrealistic expectations for what an exclusive relationship entails (i.e., being together 24/7, adjoining burial plots, etc.), and during the course of a couple of days Jamie and Joey are both dumped, leaving Jeffy the one to come to dinner with Tom. At dinner, Jake's squirrel problems end up causing male bonding between him, Tom and Jeffy, and the three of 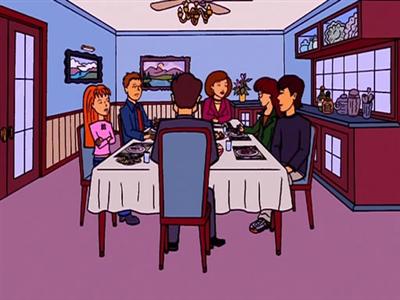