Holly J. starts worrying that Declan is cheating on her with Vanderbilt girls when he tells her he is planning a weekend trip to Yale, and finds pictures of him with another girl on Fiona's computer. She tries to find a job, to relieve her financial woes, but decides to fly to New York to be with him. When he insists she stay in Toronto, Holly J. decides to break up with him, and does it on his voicemail when he does not pick up his phone, only to find him at The Dot. Wesley and Connor convince Dave to form a band, The Three Tenners, in order to score with the ladies, but find out Dave is not a great singer. Meanwhile, Fitz's bulling is getting worse, and Eli, with Adam's help, draw a truce with him, promising a fake ID. However, they produce one with the name of a person on the list of Canada's Top 10 Wanted. 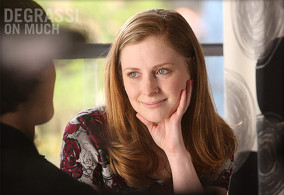