Holly J. rethinks her relationship with Declan when he asks her to come to New York with him but she still cannot because she has SATs planned for the weekend, and she has to help her parents move. Things get even worse between the two, when Declan starts offering her money, to relieve her problems, and they get into a fight, resulting in their break up. Eli give Fitz the fake ID, and calls the police when he has it, resulting in Fitz getting arrested, and not ending the bullying. Meanwhile, The Thee Tenners record a demo, and Dave gets auto-tuned to sound better. At first he hates the truth about his bad singing, but then accepts the band's new sound. 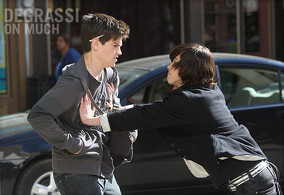