Brought to You in DharmaVision

Dharma is surprised when both Jane and her parents accuse her of having changed because she is busy attending a society fundraiser with Kitty then alarmed when Kitty congratulates her on having changed to the extent that young socialites thinks she's ""a hoot and a half."" Her identity crisis is confirmed by a visit from the spirit of her Indian friend, George, who directs her to retreat to the Redwoods to find herself and conveys a cryptic message to ""save the young one."" An uncomprehending Greg reluctantly lets her go, persuading her to take Jane with her; then, upon seeing George in a dream, rushes to the woods in Larry's van to save Dharma and Jane, who have adopted a bear cub while remaining oblivious to the nearby presence of its angered mother. Best lines: George to Dharma: ""You might have mentioned that you moved. I scared some skinny guy in the shower half to death!""; Larry, fleeing from the mother bear, slips on something in the woods and mutters, ""That answers that question!"" 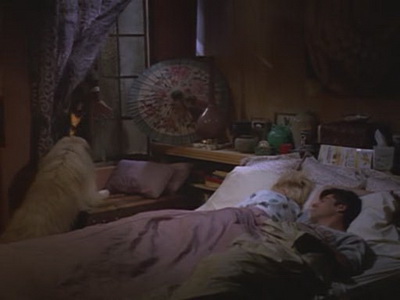