The Life of Larry

This short clip created by Seth MacFarlane featured a middle-aged slob named Larry Cummings, his cynical talking dog, Steve, supportive wife Lois, and pudgy teenage son Milt. The film begins with a live-action segment where MacFarlane, as himself, briefly describes the show and its characters. The film includes many of the same gags that would appear in the first few episodes of Family Guy, such as the Star Trek parody in "I Never Met the Dead Man." The live-action footage of MacFarlane was referenced in the Adult Swim bumps of MacFarlane introducing his favorite episodes of Family Guy, noticeably the nonchalant line, "Oh, hi there. You scared the crap out of me." In the bumps, he sat in a chair by a fireplace of a study, as in the short. 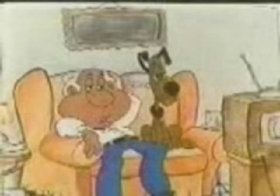