This short begins with Steve in front of a camcorder recording an SOS tape for somebody to come and save him from his bumbling owner, Larry. Steve recounts for the tape the misadventures that have ensued ever since Larry bought Steve from the dog pound, focusing on a series of misadventures and hijinks that ensued when the pair went to the mall to buy items for Larry's apartment. While at the mall, the two destroy nearly everything. Larry, looking for a light bulb for his bedside lamp, puts in a high-wattage lighthouse bulb, then criticizes Steve for saying that wasn't a good idea, commenting that he didn't go to kindergarten for 12 years because he was stupid (it was because he got his foot caught in the radiator). When Larry plugs the lamp in, it turns into a wide lightsaber and he cuts the store in half. As this is happening, Larry references the "Luke, I am your father..." line from the movie The Empire Strikes Back by saying "Luke, this is your landlord. You still haven't returned my Weedwacker." 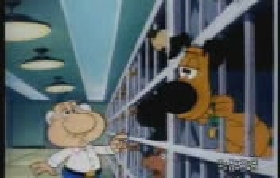