The main character of the series is a bird, whose full name is the "Fiddley Foodle Bim Bam Boodle Oo Diddley-Doodle Oodle Bird". The character is voiced by Dennis Waterman (actor and singer famous for his roles as Terry McCann in Minder and Detective Sergeant George Carter in The Sweeney). The bird was originally nothing more than just a picture in a book, which was found by a young boy named Algernon. He wished that the bird would come to life, and when the wish came true they set out on an adventure with Algernon's friends, the eternally hungry Princess Toto, and his housekeeper, the overly strict Mrs. Grumblebaum. The aim of the mission is to find Algernon's lost parents, two members of the Potty Explorer's Club- Carzy and Maudy. They were lost exploring in a sieve. However, Algernon's dastardly Uncle Arbathnot is out to ensure that their mission does not succeed, and also to seize a mysterious treasure chest. He is assisted by a muscle-man named Damage, a Frenchman named Flannel, and a pirate named Pierre Head, who, like most pirates, is accompanied by a parrot — a wise-cracking green glove puppet. The show features a guest appearance from Cilla Black, who voiced the President of the Potty Explorer's Club. 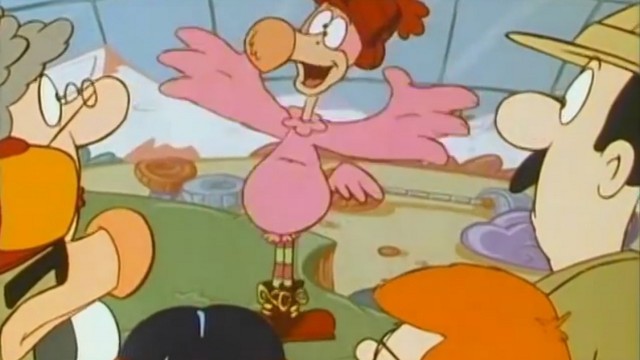