Foster poses as a record executive to investigate a band whose music inspires violence. - - - Quatrain 30, Century 4: "Where iron chariots are forged / The sweet youth cries revolt over a bitter melody / The poisoned song taints mind and soul / Spread by air across the land' s tears washes away ties to Rome / Fear extracts vain sacrifice until the raging pyre of the deluge is quenched." Seemed like Nostradamus' "iron chariots" might've been a reference to Detroit, Michigan & the Motor City. A mob of teen-agers had made headlines when they assaulted two officers at an underground club. With both cops listed in critical condition, parents blamed a local band called Sonic War for inciting the violence. I knew if the aliens were involved, this was about a lot more than rock-n-roll. I posed as a record company executive on the lookout for the next big thing and approached Sonic War's manager, Preston Barry. 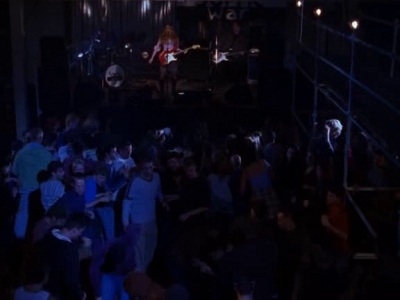