Destroyer in the Dusk

Beyond The Grave awakens from his long sleep and defends his friends Dr. T and Mika from a hoard of mysterious white creatures called OrgMen who can manipulate their body to form weapons. We are introduced to The Organization(aka Millennion), who is the Mafia for this city, Billion. The head of this group is made up of five men shrouded in shadow, their leader, the ruthless Harry MacDowell(aka Bloody Harry), rules this city. Mika and T go into hiding with Grave while Mika tries comes to grips with her mother's recent death at the hands of Harry. After a blood transfusion, something necessary to keep Grave "alive", he wanders off into the slums trying to regain his shattered memories while Mika tails behind. As they arrive at a graveyard, Grave stares down at three graves, marked only by a meager gathering of pebbles. At this time, more Org monsters and Mafia agents attack, and even without his guns, Grave dispatches them easily, though an OrgMan steps from among their ranks and, after growing extremely muscular, fights it out with Grave. T rushes the truck down to the graveyard and delivers Grave his coffin from which he unloads a volley of bullets that decimate the OrgMan. We cut to Harry, who has just received a photo from the OrgMan's memory of the man who is protecting Mika. Harry recognizes this man as Brandon Heat, once his best friend, and Harry vows to kill Brandon as many times as it takes. 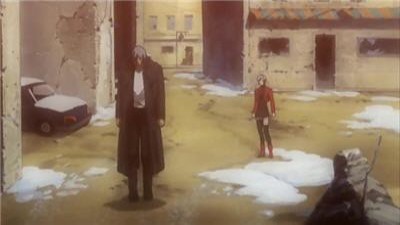