The BAU investigates a murder in which the killer exposes the victim's vocal cords to literally play them like a cello. Meanwhile, Hannibal discovers that the killer, Tobias, murdered the victim as an attempt to gain Hannibal's attention but then makes an attempt to take Lecter's life. Will is driven to distraction by strange noises in his head and turns to Alana, in a romantic way, seeking peace and stability. Hannibal describes his relationship with Will to his therapist, Dr. Bedilia Du Maurier. 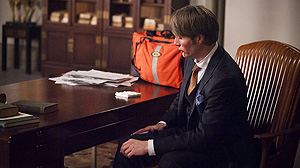