A convention of white supremacists led by Russell Slocum antagonize two elderly African-Americans, Carrie and Garland Fisk, who are on a long-delayed honeymoon. The Fisks return from shopping to find their room has been broken into and trashed. Pushed too far, Garland, disguised as a waiter, slips into the banquet room and flings a tray of food at Slocum. Peter informs Slocum that two of the hotel's chambermaids saw members of his group break into the Fisk's room. Peter packs the racists' bags and gives them a small refund, with a reimbursement for the Fisk's deducted. An overprotective mother, Helen Scofield, seeks psychiatric treatment for her 21-year-old daughter, Andrea, who has been mute since seeing her father burn to death. After a doctor recommends institutionalizing Andrea, the young woman wanders away from the hotel and befriends a street mime named Michael. With Michael's encouragement, Andrea speaks for the first time in ten years and begs Michael not to leave her. Michael 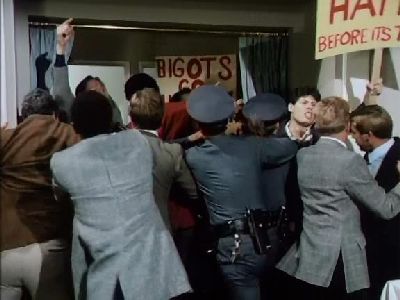