Reishin and Akane enter a shrine which contains the Masagami, to which Reishin begins to absorb the power of the Master Tera Stone before destroying it. Ghosts filled with dark auras emerge as some begin to scatter throughout the forest, in which Yakumo and Riona synchronize to fend them off. As Keita regains consciousness, it is revealed in the past that Kuro was to be sacrificed to the Master Tera Stone to prevent the rage of the Masagami. However, Reishin, having been against the matter, was forced to slaughter his tribe. Therefore, he had chosen to form a Contract with Akane to break the curse of the Masagami once and for all. As Kuro awakens from her stasis, a surge of Tera Energy is released, soon unveiling that she is the source of the Masagami. 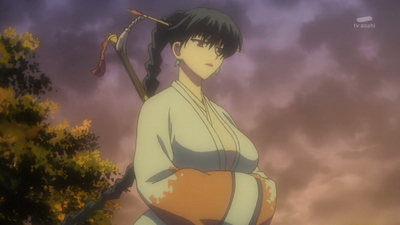