Ewan and Charley are finally on the road, all happy and excited to be there. First stop Prague. Ewan and Charley enjoy playing the tourist: having a caricature done, seeing the sights and visiting the Church of Bones at Kutna Hora (both in disbelief as to what it's made of). After stopping in a fairy-tale town, Ewan and Charley head for the border into Slovakia and their rendezvous with the support team. Trouble arises in the form of forgetting to get the carnet signed at the last border. The difficulty causes tempers to flare and Charley and Russ have their first tiff. 'Negotiations' with the border guards finally grants them passage. Once in Slovakia, Charley and Ewan admire the landscape and stop to visit a castle in Bojnice which they end up getting thrown out of. Just before the border out of Slovakia and into Ukraine, the guys are warned by a local about 'grossa mafia' in Ukraine. Arrival at the border yields problems as according to the officials originals of the vehicle ownership documents are essential (their photocopies won't do). The situation becomes a nightmare as Ewan, Charley and the crew are forced to wait for more than 12 hours at the side of the road with only the use of the filthiest and smelliest bathroom in the world. At around 2am they are eventually let through. Exhausted, they accept the invitation of a hotelier they met during the crossing delay. Deep in the woods they arrive at the expensive and gaudy-looking Kamelot hotel, and are immediately suspicious but uncertain as to whether they should be alarmed. Next morning they realise that the hotelier was really just a nice guy who wanted to help them. On their bikes again, Ewan and Charley comment on how different culturally and yet so close geographically Ukraine is; like 'stepping back in time'. Unexpectedly they find themselves at in internal border (checkpoint) where Ewan kills the time by connecting with an old woman. Later in his video diary we learn how profound an effec 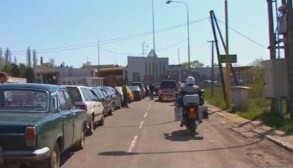