Ewan and Charley are on the road to Kazakhstan. They notice how both the terrain and people have changed. At the border they are met by a welcoming committee. Almost immediately they encounter the horrible roads they've been dreading. Claudio (the cameraman) falls first. Later Ewan admits to being scared about falling off and nervous about the bad roads. The second greatest problem for Ewan and Charley are the constant police escorts: the last thing they want, they are quickly growing very tired of them. Another welcoming committee which although the guys appreciate, they want to be unfettered in their journey. A light moment filming a herd of giant woolly camels quickly turns heavy. A very rattled looking Ewan and Charley tell how a man in a car just pointed a gun at them. Another police escort takes the guys to a roadside turnout filled with more police cars and television cameras. Ewan is confused and upset. A policeman offers his house as a rest spot. Ewan is exhausted and happy to sleep on anything. Ewan and Charley see themselves on the local TV news and realise it's impossible to fully blend in. A light-hearted moment before bed ends a long and arduous day. Another police escort delivers them into a full-blown media event. Charley voices how bad he feels for Ewan. They state they don't need any more police escorts. Free for the first time, Ewan and Charley drive to their first night camp. Ewan is giddy at the prospect while Charley is a reluctant camper. They wonder what else is to come. In great spirits, Ewan and Charley have a great visit to a UNICEF project: a school with an indoor-climbing wall for kids. More terrible roads: Ewan talks about wobbling all over and Charley, the experienced off-roader says they are the worst roads he's ever seen. On cue we see the guys struggling with their bikes in the sand. At their second camp Ewan reveals a bug bite on his forehead and explains how being scared of failing on the bike has 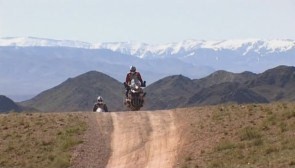