On his way to the Coachella Valley for the Big Carrot Festival, Bugs Bunny gets lost in a bullring in the middle of a bullfight between Toro the bull and a very nervous matador. Bugs famously declares he "shoulda make a left turn at Albuquerque". As he asks the matador for directions, the matador escapes into the stands, leaving Bugs to fend for himself against Toro. 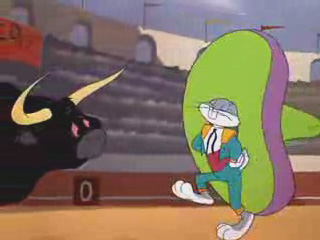