Billy helps a woman whose car has broken down along the side of her road. He gives her a ride to a gas station. When she doesn't have the money to pay him, she gives him some passes to a club where she is performing stand-up comedy for an Open Mic night. They get along very well, but Billy soon learns that she has an eight-year-old son. The boy initially rejects Billy, but they soon begin to bond. Billy loses Alison's trust by lying to her so that she will loan him the money Dawn needs for car repairs to make it to her first professional stand-up gig. The relationship falls apart when Billy gets into a confrontation with Dawn's useless ex-husband. Jake and Sandy try to rebuild their relationship, agreeing to go on a ""platonic"" date. Things quickly get out of hand, leaving Sandy enraged and the two not on speaking terms. 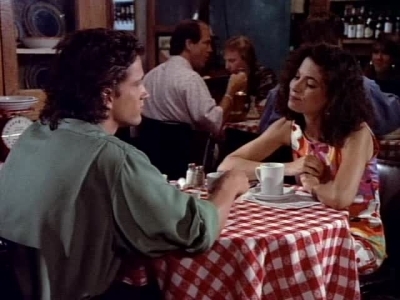