One of Billy's co-workers discovers that he lied on his résumé, and reports him to Nancy. Nancy assures Billy that she hired him for his talent, and gives him a writing assignment. After he does a great job with an article about a dog wedding, she promotes him to staff writer. Amanda continues to give Alison a hard time at the office, so Alison retaliates by erasing Amanda's messages to Billy. Amanda crashes a celebration dinner for Billy and lets him know that she has been calling. Alison takes Billy out to lunch and grows concerned by the amount of personal attention Nancy is showing him. She warns that Nancy may be attracted to Billy, but he takes offense to this. Alison makes a special dinner for Billy and apologizes, but he ignores her and goes back to the office. Nancy makes a pass at him, and takes away his promotion after he turns her down. He threatens to quit, but his lecture inspires her to apologize and restore him to staff writer. Michael grows more concerned by his attraction to Kimberly. She confesses her love to him, and they kiss in the hospital parking lot. Michael gives Jane the cold shoulder, and later goes to Kimberly's place and begins an affair with her. Matt gets a date with a lawyer, but the man turns out to be an egomaniac who only cares about material items. Rhonda annoys Matt by pushing him to give the guy another chance. He says that the fact that he is gay doesn't mean he has to settle for just anyone. 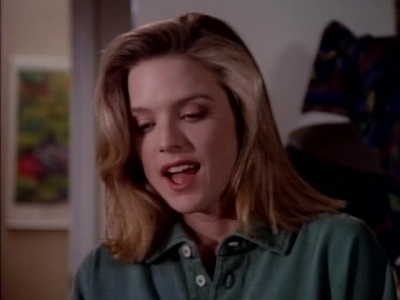