Peter fires Sydney after learning that she sold his house (which he had listed as a company asset) to pay the practice's debts. Peter has to move into Amanda's apartment. Sydney goes to work at the boutique. Billy goes on a date with Sam, but is still preoccupied with Alison. At the grand opening of the boutique, a drunken Billy announces that Alison and Jake are sleeping together. An outraged Jane throws Jake and Alison out of the store. After confronting Alison at her new apartment, Jane accidentally trips over some oily rags and sets the building on fire. Kimberly is ordered to appear before the medical board. She voluntarily surrenders her license and takes a job as the Burns/Mancini receptionist. Taylor has an appointment with Peter, and asks Amanda to handle advertising for the restaurant. Michael warns Matt to get clean. Matt nearly suffers a heart attack while high on PCP. He is later arrested for soliciting an undercover cop. 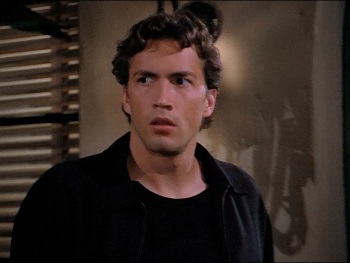