Jane saves Jake and Alison from the fire. Jane apologizes for her outburst, but later tries to seduce Billy to make the couple jealous. She also makes crank calls and throws a brick through Jake's window. Jake believes Billy is responsible, and assaults him when he and Samantha return from a date. Amanda is annoyed when Taylor and Kyle just happen to show up at the same Palm Springs hotel where she and Peter are spending their honeymoon. Arthur Field gives his son, Craig, a job at D&D. Billy overhears them plotting to destroy Amanda. Billy decides not to share this information after she bows to Arthur's edict and demotes him. Sydney is smitten with Kyle. When he expresses interest in one of Sam's paintings, Syd claims to be the artist's agent. Kimberly is emotionally unable to sleep with Michael. He meets an attractive woman while jogging along the beach. Matt checks into a rehab facility, where the head doctor takes interest in him. 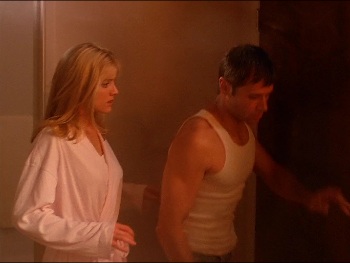