Jane slashes Alison's tires. Jake catches Jane following Alison and him, and orders her to stop stalking them. Jane files a restraining order against Jake. Sam pushes Billy away after Jane shares details of his past, but Billy is able to win her trust. Amanda denies Craig's attempt to undermine her in front of a client. Amanda becomes annoyed when Peter neglects his job and begins hanging out at Kyle's restaurant and drinking heavily. Michael sleeps with Megan, the woman he met while jogging. Sydney tells Kyle that the artist she represents is a Russian immigrant named Samuel Kirov, and offers to sell him the painting. Samantha reluctantly agrees to this deception. Matt is thrown out of medical school, and suspects that the doctor at the rehab facility, Dan Hathaway, squealed on him. Dan tells Matt that the classmate who got him hooked ratted on people after he was busted. Dan helps Matt get back into school after he agrees to counseling. 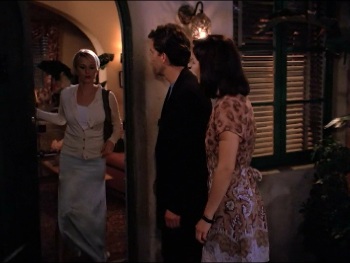