Theresa and Cyn have been friends for forty years, but the traffic has generally been going in one direction - family, job and even Theresa's love life have all had to be put on hold for Cyn. When Theresa meets Gabe, a silver fox of a trumpet player, Cyn is put out that Theresa's flirting with him. Meanwhile, Cyn has her driving test tomorrow - fourth time lucky! Tipsy, Theresa says people learn to drive after they've passed their test, and that if Cyn had someone else to take her test for her she would be fine. Gabe stays over, and Theresa feels great - it's usually Cyn who's the wild one, but with Gabe she feels twenty years younger. Later on, Cyn rings: she failed her test again, and wants Theresa to come round. Theresa lets slip that Gabe stayed. Cyn is quietly furious. Eventually, Cyn tells Theresa that Gabe is a wife beater. Theresa's devastated - she's had trouble with men before, but thought Gabe was different. Cyn reassures Theresa that she is there for her, and brings up the subject of her driving test... Cyn dyes and styles Theresa's hair to match her own. Theresa tries to voice her doubts, but Cyn rides rough shod over them. The plan works, and Theresa passes the test. Cyn's elated: the first thing she's going to do is take her out to the seaside. Theresa grips the seat as Cyn almost loses control of the car. On the way home, Gabe calls. Cyn's furious that Theresa is even speaking to him, but for some reason Theresa hears him out. When Theresa finds out that the allegations are completely false, Cyn crashes the car and ends up in hospital. Cyn begs Theresa not to tell the police, but Theresa realises that Cyn can't be trusted. Cyn is furious: how could Theresa do that to her after 50 years of friendship? 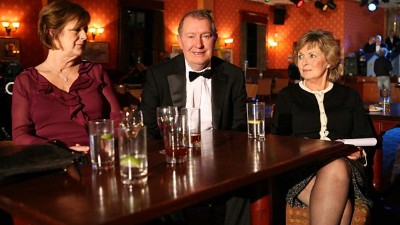