Jury polls are taken from the public and show that fifty-nine per cent think that Neil Avedon is guilty of the murder of Jessica Costello. This is discussed by the firm. Neil's mother is brought in as a character witness to testify for the defense. Neil and his mother do not appear to get along very well because his father was abusive towards him as a child. She breaks down on the stand crying for forgiveness. Neil's old neighbour and Karen Lockwood (a friend of Jessica's) both testifiy that Neil is a good person with good intentions. Grasso husband dies of a heart attack in the night so she does not show up to court the next day. However, the procedings carry on. Grasso eventually gets back to her work and offers the defense a deal after Neil's mother's testimony, four years for involuntary man-slaughter. Neil thinks about the offer but ends up rejecting it. Julie tells Hoffman that Justine had arranged her meeting with Cross when they had gotten married. Hoffman confronts Justi 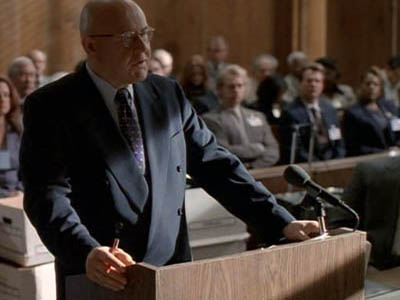