Hoffman and Lisa Gillespie meet with Roberto Portelegre who had been arrested for rape once again. Det. Polson tells Hoffman that Roberto knew Julie Costello and they are investigating him for the murder. Hoffman's law firm is forced to drop the case due to a conflict of interest. Julie meets with Arnold to talk about her testimony of Dr. Graham Lester. Julie is worried and reluctant but eventually agrees. The firm's private investigator obtains photos of Richard Cross helping a man, Johnathan Kimbell, off his private jet. Kimbell turns out to be an AIDs victim who's medical bills are being paid by Cross. He also happens to be the brother of Susan Dominque (the nurse at Lester's office who testified that Neil called the night of the murder to confess). The defense calls both Susan and her brother to the stand in court to prove that Cross had been bribing Susan to lie. Julie is eventually called to the stand and is completely unco-opertative and says the opposite of everything she ha 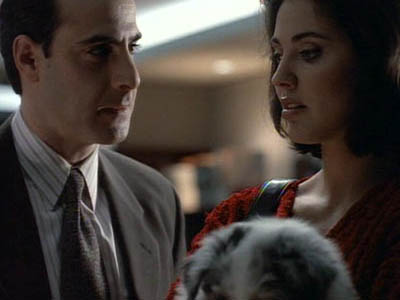