Eduardo Portalegre surprises Justine in Richard's office while she is working. After a few moments of small talk, he makes a pass at her. As she resists, he turns violent. Richard enters the office and burns Eduardo with his own cigar to stop the attack. After Eduardo leaves, Richard seems somewhat distant and cannot seem to remember that Eduardo was there just a few minutes earlier. The closing statements begin. Miriam shows the jury graphic pictures of a bruised Jessica as well as the tape of Neil strangling Melissa, over Ted's objection. Ted argues that Miriam's case is built on a fabric of lies woven by Richard, Graham Lester, and Susan Dominick. During a settlement conference in their divorce action, Annie angrily tells Ted that a reporter called her asking for a comment about Ted's affair with Judge Bornstein. Ted tells her that the affair was over long before he and Annie were ever involved. Garfield finds out about the affair and requests that Judge Bornstein recuse herself. Wh 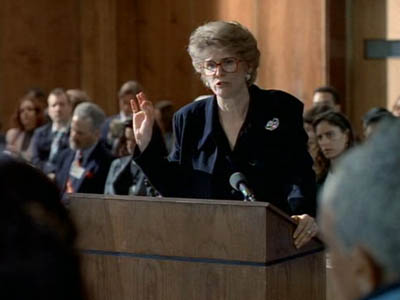