When a top prosthetics researcher is found dead, Neil receives an anonymous e-mail telling him that the man was murdered by the "Synthetics" whose existence the Odyssey 5 group has discovered, which it says are the physical manifestations of Dr. Chandra's "Sentients". It claims that they are now after the researcher's six-year-old niece Stevie, all because of a ""cybiotic interface"" he was working on which would allow computer technology to control organic systems. Visitng Stevie's teacher, they find out that she is deaf and received a cochlear implant, which her uncle had been tinkering with. Eventually, the team locates Stevie and finds out that her implant allows her brain to control a swarm of insects that have been fitted with cybiotic interface chips. But mysterious figures who may be Synthetics have relentlessly tracked Stevie to Kurt's place. 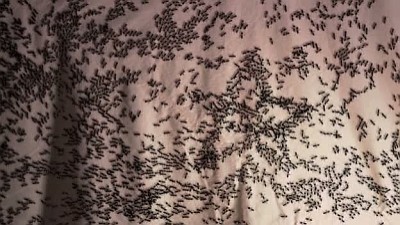