The Case of the Prodigal Parent

Lorraine Stevens is fighting off the advances of the owner of the import-export company where she works, Philip Larkin. Later that evening she is asked to pick up something at the Alcorn Jewelers store. The owner is unaware of what she is to pick up and suggests she make a phonecall to find out. She calls Philip Larkin and while the phone rings we see Philip Larkin dead in his home. Standing over him is Joseph Harrison who wipes off his fingerprints from the telephone and leaves. When his fingerprints are found on the gun case of the murder weapon he is accused of the murder. 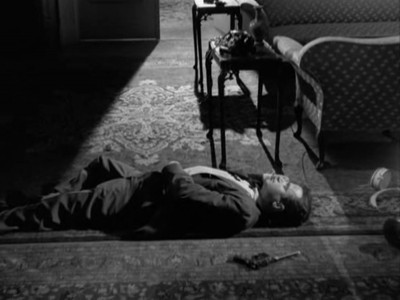