I made some pottery from the clay in the new area to see how well it performed. A large bank of clay was exposed by the side of the creek. I dug it out using a digging stick and took it back to the hut. Small sticks and stones were picked out of the clay and the whole mass was mixed to make sure there were no dry lumps. When this was done the clay was then left next to the fire to dry slightly so that it became a stiff workable material to form pots from. No further processing was done to the clay. I formed small pinch pots from the clay by taking balls of it and pinching out the shape of the pots. Small cracks that formed while shaping were simply mended by wetting and smoothing over. Several pots were made this way. They were then left to dry completely next to the fire until they were completely dry. To fire the pot, it was placed upside down in the hot coals and covered with sticks in a tipi fashion. The wood both acts as fuel and protects the pot from sudden changes in temperatures such as those caused by sudden winds. When the fire was burning well, I increased the temperature of the fire by fanning it with a fan palm frond. The pot glowed red hot amongst the coals and so was fired to a sufficient temperature. After waiting overnight, the pot was retrieved from the ashes and struck with a stick. The pot gave a clear ringing sound indicating it was strong and had no cracks (hollow sounds indicate the opposite). Now I had a small bowl to carry water in. A larger pot was then made from the same clay. This time the walls of the pot were built up using the coil technique where long rolls of clay were rolled and then squashed onto previous layers. The last layer was pinched outwards to form a pot lip. A lid was made for the pot by making a flat disk of clay with a small handle for lifting. When dried the pot was then fired as before but in a larger pit outside the hut. Again, the pot was covered with wood protecting it from sudden breezes that might cool or hea 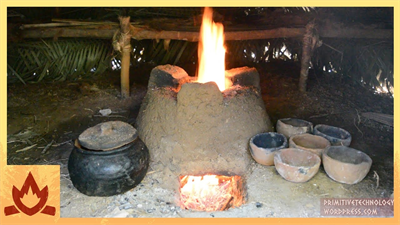