I built an A frame hut as a large work space for projects. First I made a celt hatchet to cut timber for the hut. The axe head was made of amphibolite and the handle was made of a species of wattle. For the hut the floor plan was 4 X 4m. The height of the ridgeline was 2 m above the ground. +A post was planted in the ground to support the ridge pole at the back of the structure and an A frame was put in the front to support the ridgeline. The rafters of the hut were then attached to the ridgepole. Palm fronds were then collected, split and lashed to this frame. The dome hut was disassembled and its thatch was added to the structure. Approximately 1200 fronds were used in total. For the ridgeline, thatch was lifted in place and rested on without lashing it down. Instead, pairs of sticks lashed together were lifted in place sitting over thatch preventing it from blowing away. These are known as “jockeys” as they resemble a rider sitting on a horse. A wall of wattle and daub was built at the back of the structure. Wooden poles were planted into the ground and lawyer cane was woven between them. Soil was dug from around the hut forming drainage trenches while also supplying the mud used to daub the wall. No fibre was added to the daub, just straight mud. Pegs were stuck into the wall to form a convenient rack to hold the stone axe off the ground when not in use. Later, pegs were added to support the fire sticks too. A bed was made by hammering in wooden stakes and lashing timber to the frame. This was covered with palm fibre to act as bedding. Atherton oak nuts were then collected and eaten/stored in a pot. Latter, heavy rain fell testing the huts ability to shed rain. The hut stayed dry while the water flowed off the thatch and into the drainage trenches left over from digging the mud for the wall. The A frame hut is a simple shelter that can be built quickly and simply. It’s basically a large roof built directly on the ground. The shape is strong and should re 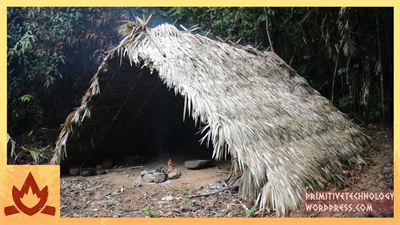