At the old hut site (the new one being temporarily cut off by flooding) I made lime mortar from the shells of rainforest snails by firing them in a kiln, slaking them in water, mixing them into lime putty. Limestone is basically calcium carbonate (CaCO3). The general source of lime is limestone and various other calcareous minerals, though shells, egg shells and coral are other sources of lime (for more information see video on Corporals Corner channel: https://youtu.be/tOhAfaFboNU). When heated above 840 degrees Celsius, the lime decomposes into calcium oxide (CaO) or Quicklime and releases carbon dioxide (CO2). When water is added to the quicklime it becomes calcium hydroxide Ca (OH)2 or lime putty. From here the calcium hydroxide can then be shaped into a form and allowed to set. Carbon dioxide enters the lime putty as it dries causing it to turn back into calcium carbonate. The new calcium carbonate has then set, remaining solid and water resistant. In my local geography, calcareous rocks such as limestone are absent leading to a difficulty in acquiring the feed stock for lime making. However, I was still able to make lime by collecting the shells of large terrestrial snails that are native to the rainforest here. The unoccupied shells of these snails were gathered up and stored at the hut. Fire wood was gathered and packed neatly into the kiln. Importantly, the firewood was stacked on top of the grate rather than underneath it in the firebox as is the normal procedure for firing pottery. Using an ordinary updraft pottery kiln in this configuration allows it to reach much higher temperatures than would be possible during normal use. The wood was lit from above and the fire burned down towards the grate. Alternate layers of shells and wood were added on to this burning fuel bed. After adding the last layer of wood to act as a “lid” to prevent heat loss from above I left the kiln to finish on its own, unsupervised. The whole process took about an hour and a 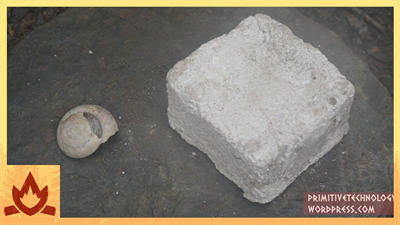