I made a blower and some charcoal at the new area in order to create higher temperatures in for advancing my material technology. I took Fan palm leaves and fashioned them into an impellor (about 25 cm in diameter) held in a split stick as a rotor. I then built a housing from clay (slightly more than 25 cm diameter with inlet and outlet openings about 8cm in diameter) and assembled the blower. I opted not to make a bow or cord mechanism as I’ve done before due to the complexity and lower portability of such a device. The lighter impellor material (leaf instead of the previous bark) made it easier to spin by hand anyway as it has a lower momentum. Each stroke of the spindle with the hand produces 4 rotations, so about 2 strokes per second gives 480 rpm. The blower increases the heat of a fire when blowing into it and I would guess it’s more effective than a blow pipe and lungs but don’t how it would compare to a primitive pot or bag bellows for air supply. A small furnace was made and then fired with wood fuel. The wood was wet but managed to fuse and partially met sand in the furnace. To get better performance, I made charcoal from the poor quality wood. I made a reusable charcoal retort to make it. This was different from the previous reusable mound I built as it consisted of a mud cylinder with air holes around the base. To use, it was stacked with wood and the top was covered with mud as opposed to the previous design which had a side door. The fire was lit from the top as usual and when the fire reached the air entries at the base (after an hour or two) the holes were sealed and the mound left to cool. The top was the broken open the next day and the charcoal removed. Another batch was made using significantly less effort as the main structure of the mound did not need to be rebuilt each time, only the top. Iron bacteria was again used to test the furnace. Charcoal and ore was placed in the furnace and the blower utilised. After an hour of operation the 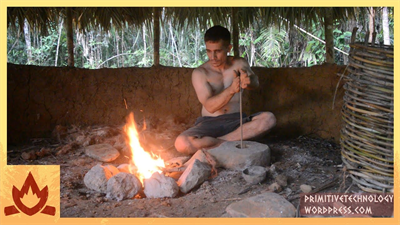