I planted a yam in a large basket like enclosure and then 6 months later harvested, cooked and ate it. My previous attempts at growing yams were stymied by wild pigs and scrub turkeys. On learning that yams are in the area, these animals will seek out any tubers planted and eat them. So my solution was to build a large basket like enclosure to protect the growing vine. 13 wooden stakes were hammered into the ground (an odd number being important in any weaving project) and lawyer cane harvested from the forest was woven between these uprights. The basket was about 1 m in diameter and about 75 cm high. A large yam, partially eaten by wallabies from a location further down the creek, was dug up and carried to the site. A small pit was dug in the enclosure and the yam simply placed in it. The enclosure was then back filled with dead leaves for fertiliser. As time progressed the vine grew above the basket and a long pole attached to it so it could climb into the canopy making full use of the sun. After 6 months and no maintenance, weeding or watering the yam had grown into two large tubers whereas the original yam had rotted away leaving a thin husk. The new tubers were dug up using a digging stick. As carful as I was, the yams sill broke off with more tuber still under ground. This portion will probably strike next season anyway. In the canopy, the vine also produced smaller tubbers called “bulbils”. These were collected in a pot to be used as seed yams for a larger garden I’m planning. You can eat bulbils as well but the larger yam is generally eaten instead due to its larger size. To cook the yam a fire pit was dug about 30 cm in diameter and about 20 cm deep. Wood was piled above the pit and set alight. The hot coals then fell into the pit where rocks where added to retain heat. The coals were scraped aside and the large tuber was broken up and thrown on top. The coals were raked back over it and a fire started on top. This cooked for 30 minutes before be 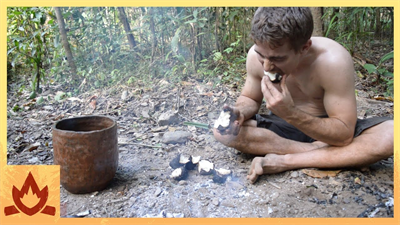