With Franky's hold over the women growing, she attempts to show the screws who is in charge by getting the women to stay in the dining room until she gives the order for them to leave. Prostitute Chrissie Latham tries to seduce Bill but he turns her down. Lizzie and Marilyn mess around with the wiring so that Eddie will be called in. Marilyn and Eddie climb up into the roof for a "liaison". Bea's return sends Franky over the edge and she starts a riot in the dining room. Bea, Doreen and some of the women are trapped in the laundry; Franky, Lizzie, Chrissie and others are in the dining room. Franky wants the gates unlocked so she and Bea can fight it out. Trapped in Franky's side, pregnant prisoner Rosie Hudson goes into labour. Meg is taken hostage by Franky's mob and tied up in the dining room. Bill tries to talk Franky into letting Meg go. She agrees, but in the handover all hell breaks loose as she and her gang overpower the officers and let Bea's women out. Bea and Franky fight one 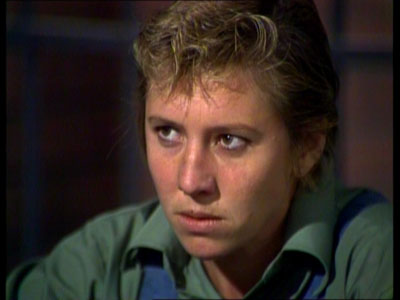