The Governor introduces a volleyball program to let the inmates work off their tension. Doug gets out of jail and turns up at the Warner farm to see Lynn. Mr Warner offers him a job on the farm, but they end up running away back to Melbourne together to get married. Graham Lang arrives at the prison to interview Marilyn and asks Vera to help him get information out of her. During a volleyball game, Marilyn accidentally hits Vera with the ball, giving her the opportunity to have her sent to the pound. Later, Bea advises Marilyn to give Lang the info he wants, to get Vera off her back. Franky gets a telegram about her brother Gary having an accident, but as she can't read, she doesn't know what it says. She gets Doreen to read it for her, but Doreen is too scared to tell her what it really says and she rebuffs Mum's efforts to help. In the end it is Karen who tells Franky the truth, that he is critically injured and in hospital. By the time Franky gets to the hospital to see Gary, he has 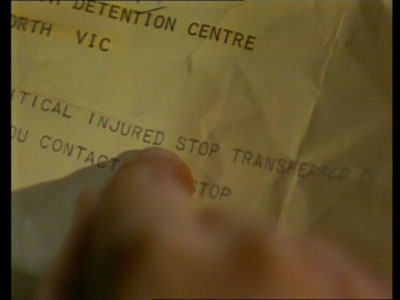