Melvin (William Ainscough) is dragged to Point Park camping grounds, because his father wants to beat an office rival's time to reach Lookout Point, and Melvin doesn't want to go being so afraid he locks himself in the car until his family coaxes him out. A creepy forest ranger named Ranger Jackson (Juan Riedinger approaches them, warning them to camp on the designated spots and leave no trace. The forest ranger also states that several campers have gone missing on the trail. His mother steps off the trail to go to the bathroom and a wind bearing spores hits her. The next morning, his mother is missing and although they see her on the trail, she runs away. Their father goes searching again after they set up camp for the night when the wind starts up again. The next morning, he is uncommunicative, and his face and hands turn green, actually tearing up the map and forcing the family to go up the trail instead of down to get help. When they make it to Lookout Point, their mom has returned. Now their mom and dad are turning into mushrooms just like the bodies of the other campers at the point. Although Melvin and his siblings run, his twin brother and sister are hit by the spores and begin the mushroom brainwashing. Melvin manages to make it back to the car, but Ranger Jackson is there and sprays spores at Melvin. NOTE: Appears to actually be S04E09 per Wikipedia & IMDB. Previous seasons appear in state of flux - possibly as a precursor to being corrected. 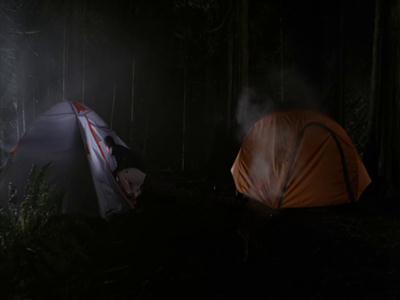