Fire in the Sky

Event: PACIFIC NORTHWEST 1398 A.D. Sydney is approached by a businessman, Bobby Green, who wants Sydney to investigate the finding of a strange piece of a metal in a dig in Washington State. Sydney and Nigel head there, only to find the local sheriff, Dark Feather, hostile. Government agents are also on their trail. Fleeing the Feds, Sydney eventually finds that Dark Feather is sympathetic to her cause, and they track down a site holding ancient relics of his tribe. One of them is a series of marking that match the piece of metal, which Sydney and Green believe to be from an alien spacecraft that met with the tribe's shamans centuries ago. Green claims to have been an alien abductee, and believes this evidence will substantiate his claim. The Federal agents, headed by a Major Hillhurst, confront Sydney, Nigel, and Dark Feather at the cave site. Things look bad until Dark Feather's deputies come to the rescue. However, in the ending Sydney's office is ripped apart and the metal relic an 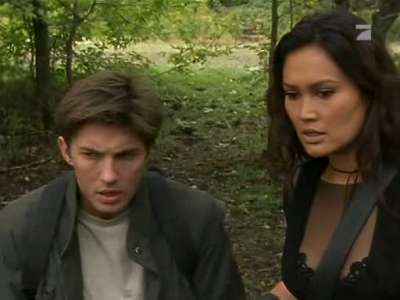