So Shall it Be

Event: STONEHENGE, ENGLAND 121 A.D. Sydney is plagued by dreams of De Viega as they meet with a druidic expert in England to get hold of a map leading to Druid astronomicon - the ""keys to Stonehenge"". But it's a fake Watson, as Karen discovers. He wants them to steal the map to the astronomicon from the secret society De Viega worked for, the Gar'al Na'tash (sic). ""Watson"" is actually Fabrice's son Andres, who reveals his father is alive but facially scarred. They find a coded blade but need the scabbard to solve the code. Andres leads them to his father, who offers to help them against the Gar'al Na'Tash to save his son. Andres is captured, and Fabrice bargains with the scabbard for his son's life after they use it to solve the code. While Sydney and Nigel go for the hidden site, Fabrice is captured by his society and tries to reconcile with his son. He then trades his life for his son's. Sydney and Nigel avoid the goons and recover the keys to the astronomicon. At the end someone lea 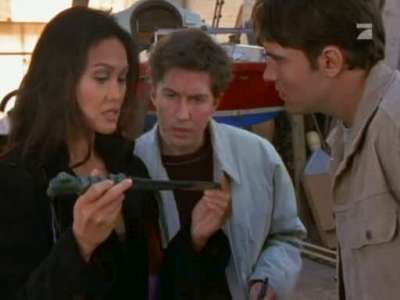