We start off with the roadies talking about how dissapointed they are with Danny's performance in the previous mission. At the beach, Danny talks about how he has a poster of a Playgirl model on his wall. Derrick immediately says ""Earmuffs"" and places his hands over his ears. Derrick explains that he does this whenever Danny talks about his homosexuality that Derrick doesn't want to hear. Danny explains that he is insulted cause noone sees him do that when Derrick talks about his girls. They receive their next clue that says it will have something to do with a plane and pictures and they must go to the Aero Club de Santiago. On the way to the next mission, a sudden crash halts the RV. It seems that Derrick was driving and hit a tree that was hanging over the street. It ripped opened the top of the RV aswell as breaking the windshield. As the tree was hit it also ripped it out of the groung having it land on two other cars. One of the other drivers calls the police which arrive a 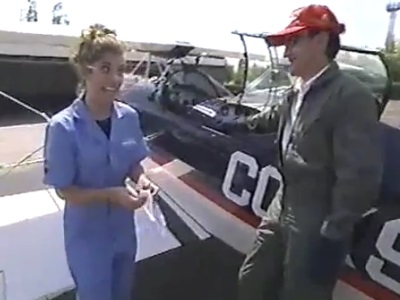