Wilhelm is delighted with the job George did on the project; however, he has no idea what he did or how he did it. The detective on the case thinks he's found Jerry's car, damaged beyond recognition. It's not, and later Jerry's mechanic calls him from the car. Kramer spots Jerry's car in Ohio. Steinbrenner calls George into his office about the project report and has him committed. Kramer ditches the cans, bottles, mailbags and Newman in pursuit of Jerry's car. Newman finds a farmer's house, complete with the proverbial daughter. The mechanic throws the clubs and bag at Kramer's truck, allowing him to get away. Deena is happy to see that George is getting the help he needs. Peterman is stunned when he finally gets the clubs, "Elaine, I never knew Kennedy had such a temper." 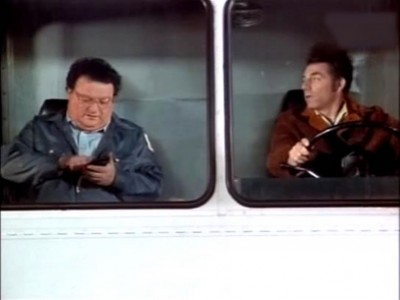