It's Friday night! The boys are ready for a night on the town, but they can't find any dates. No matter, they go to a totally jammin' bar anyway. After an initial frosty reception, the boys soon win over the bar with a Coyote Ugly style bar dance. While the dance gets the two Michael’s a girl, David Wain is left out because of his Jewish faith. David is worried that the girls will split the group up, and he is right. Michael and Michael move out of the apartment and move in with their girlfriends. However things don't go well: Michael Ian Black is snowed under with kids and paying bills, and Michael Showalters girlfriend is a raging alcoholic who beats up Michael. Things come to a head and the two Michael’s decide they want to move back in to their old apartment. But when they go back, they discover David has already found two new roommates! Distraught, the two Michael’s decide to move to Rome. David realises that he wants his old roommates’ back, and runs to the airport after a quick stop for hot fudge soufflé. The boys are reunited and all three move back in to the apartment. 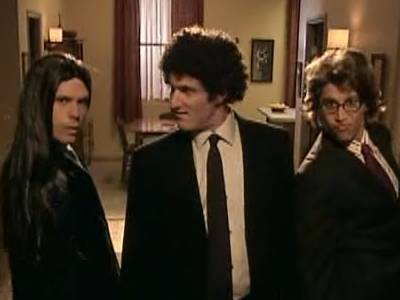