Welcome to The City! Whitney Port, who we've all come to know and love as Lauren's co-worker and friend on The Hills, has decided to leave her California life behind and risk it all for a new career opportunity in New York working for the fashion house of Diane von Furstenberg. Whitney has one old friend, Erin, waiting for her in Manhattan, and a whole host of new people she's getting to know. Although the coast-swapping move is professionally driven, Whitney's excited to for the chance to spend time getting to know Jay, the Australian singer/guitarist she met during an earlier trip east while working for People's Revolution. Erin and Jay, along with his roommate Adam, round out her "downtown" circle of friends; Olivia, a self-described "social," is a new colleague at DvF and invites Whitney into her "uptown" world. Arriving at the Diane von Furstenberg offices in Manhattan's Meatpacking District, Whitney is ready for her first day on the job. She's given a quick tour of the office and meets Olivia for the first time. Olivia is quick to grill her about who she knows in New York, as well as about her budding romance with Jay. Olivia also tells Whitney about a dinner party she's planning to throw at her apartment, but it's just small talk so far, and she doesn't offer an invitation. Back at her temporary home in Erin's apartment in the city's Gramercy section, Whitney gives Erin the scoop on her first day at DvF and her experience meeting Olivia. When Erin mentions that she knows Olivia, the city suddenly begins to seem like a pretty small world. The conversation then segues into Whitney's date with Jay that evening. Whitney arrives at Nero to find Jay waiting for her on the patio. They toast her first day at DvF and Jay offers to be Whitney's personal tour guide of the city. They flirt, giggle and touch ... and it isn't long before they're calling for the check. The next morning, Whitney recaps her date for Erin. She admits to going to Jay's place afte 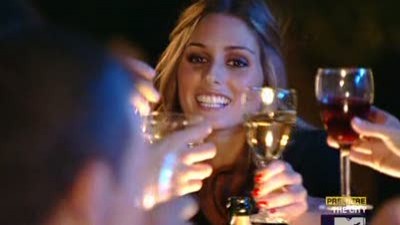