Mingling With The Commoners

While eating at Petite Abeille, Whitney and Jay talk about his band Tamarama's upcoming gig at the Cutting Room. Whitney's invited Erin and Olivia to see the show. Jay jokingly tells Whitney that he'll corner off a little area for Olivia so she doesn't have to "mingle with the commoners." On the Upper East Side, Olivia meets Nevan for lunch at La Goulue. After reprimanding Nevan, for calling her "babe," Olivia tells him that Whitney has invited her to see Jay's band play. Olivia doesn't know anything about the band, so, Nevan advises that she remember to smile and clap. The night of Tamarama's Cutting Room gig, Whitney and Erin hail a cab and head to Olivia's apartment. Erin tells Whitney that her ex-boyfriend JR may be coming tonight. She goes on to say that she's told JR about Duncan and hopes that JR never asks to get back together. When Whitney asks whether Erin wants him back, Erin only says that the timing is bad. At Olivia's Tribeca apartment, Olivia fluffs pillows in preparation for Erin and Whitney's arrival while her dog, Mr. Butler observes. When Whitney and Erin arrive, they immediately marvel at her closet and how pretty the apartment looks. Like any good hostess, Olivia offers her guests "champy" (a.k.a. champagne) but Whitney says they're in a bit of rush. Olivia isn't worried and tells Whitney that Jay wouldn't start without her being there. Meanwhile at Cutting Room, Jay and his Tamarama band mates set up for their gig. Adam shows up and asks Jay whether Whitney has arrived. Jay replies, "She'll be here -- she better be here." Back at Olivia's apartment, Olivia pours champagne for herself and her guests. Mid-pour, Olivia decides that she should be wearing all black for a rock concert. Whitney and Erin try to convince her convince her to stick with the current outfit but Olivia has already headed to the closet to find something else to wear. Erin and Whitney exchange concerned glances and Erin mouths, "We've got to go!" At the Cutti 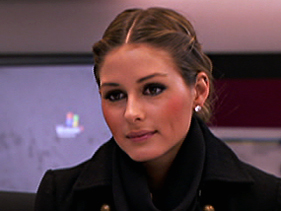