Whitney, Allie, Erin and Samantha go out for dinner at Delicatessen. Erin comments on how envious she is of the girls' careers -- with Allie as a model, Whitney working for DVF, and Samantha at Bergdorf. She's tired of doing the hostess gig and wants to figure out her career path. Allie tells Erin that her manager at One Management, Scott Lipps, is always looking for new and exciting people and offers to pass along Erin's resume. Then, Whitney invites the girls to Kelly Cutrone's birthday party. Samantha can't attend but Erin and Allie are up for a girls' night out. Erin has an interview with Scott at One Management. Her poise and confidence impress Scott and he offers Erin a production coordinator position. Erin is excited about the new gig, since it combines her two loves: fashion and music. Before heading over to Kelly's birthday party, Erin, and Allie join Whitney at her apartment. Whitney warns them that Kelly is a very "in your face" type of person and will "tell it like it is." Allie tells the girls that she likes people like that. The girls head over to Southside Nightclub for the birthday party. As they get seated in a cozy booth, Kelly stops by their table and Whitney introduces the girls. Allie immediately tells Kelly that she's heard how honest Kelly is and asks, "what do you think of the outfit?" Kelly responds, "I like you...but I don't like your leggings." Everyone laughs until Kelly leans in and asks Allie if she is "okay." When Allie doesn't understand the question, Kelly adds, "you seem so skinny." Allie seems a little taken aback but tells her, "it's not like that." Kelly seems concerned but leaves the table telling the girls that she's going to DJ. As Kelly makes her exit, Erin's ex-boyfriend, JR, emerges from the crowd and heads over to the girls. After he's introduced to the table, Whitney and Allie escape to the dance floor. Erin and JR are both all smiles as they catch-up. Whitney, Kelly and Allie rejoin Erin and JR. Kelly tell 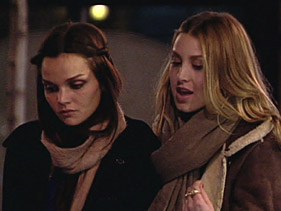