The Trial of the Incredible Hulk

David finds his way to a large city, unaware that it is run by a crime lord named Wilson Fisk. After two of Fisk's men commit a robbery, one of them attempts to assault a woman. David's intervention leads to a transformation into the Hulk, and the two men flee after being attacked themselves. Although the Hulk saves the woman, he soon changes back to David, who is then wrongfully arrested for the attempted sexual assault, in addition to several other crimes committed by the robbers. Matt Murdock, a blind attorney, is assigned to David's case. Although David is uncooperative, Murdock believes in his innocence, and seeks to prove it. While awaiting trial, David has a nightmare about transforming into the Hulk, and wreaking havoc in the courtroom. This leads to another transformation into the Hulk, who then breaks out of jail. 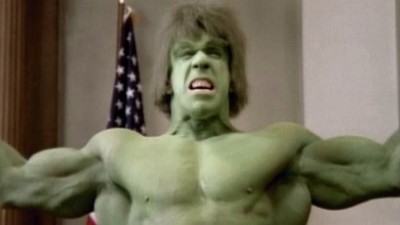