No Such Thing As an Accident

Every year in Britain there are an estimated 250,000 road traffic collisions. It is a widely held theory amongst those working on the motorway that there is no such thing as an accident - usually something or someone is to blame. This episode takes a look at the work of the Highways Agency, motorway police and other agencies who are making Britain's motorways safer and also explores the environmental, economic and emotional costs of accidents that occur on Britain's motorways. Catthorpe Junction is a major interchange linking the M1 and A14 to the start of the M6. Its outdated road layout has witnessed a number of road traffic collisions in the last few years but now it's about to be redesigned to make it safer and less congested, all to the tune of over £190 million. Overseeing the work is construction manager Mark Sutton, but it's not just a case of building a road. With the roadworks taking place on 78 acres of newly acquired farmland nestled amongst rural villages, Mark and his team have to ensure locals are happy, including the local wildlife. A protected colony of great crested newts needs to be relocated way from the works. This is a lengthy and expensive process and the cost of relocating each newt could run into thousands of pounds. Meanwhile out on the road, the Central Motorway Police Group patrol the motorway in their unmarked lorry, spying on drivers who fall afoul of the law. The Highways Agency and maintenance teams cope with the aftermath of an overturned lorry that has spilled its cargo of milk onto the carriageway, threatening to contaminate a local watercourse. 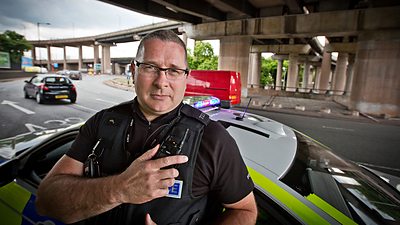