When Michael burns his foot with his George Foreman mini-grill, he requires the entire office staff to work around his new injury. When the workers aren't so keen on obliging, Michael gets angry and calls in a man in a wheelchair to put out the message that disabled people are people too. Meanwhile, Dwight acts stranger than usual, acting really nice and helpful towards Pam. It isn't until the end of the day when everyone realizes that the car accident Dwight was in earlier that day gave him a concussion (but was overshadowed by Michael's dramatization of his own burn), and Jim and Michael immediately take him to the hospital. Needless to say, Michael doesn't appreciate the extra attention that the doctors and nurses pay Dwight. 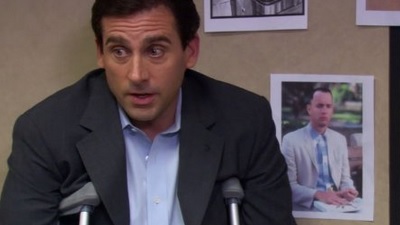