Theodore Harris (Cliff Robertson) first time in space, in 1963, didn't go quite as planned. Alone in his Mercury capsule, he panicked and aborted the mission when a mysterious violet light penetrated the cockpit and began to envelop his body. In the investigation that followed, no evidence could be found to support his story, leaving a blot on Harris NASA record and his life in ruins. Now at age 63, he knows he can never make amends with his estranged wife Madelaine (Pamela Parry), but he feels that he could clear his name if he could just get back to where he saw the light. When NASA turns him down, Harris is recruited by Carlton Powers (Barry Corbin), a self-made billionaire who plans to privatize space travel and thinks Harris presence on the inaugural flight will help him sell the service. Harris and Power are joined on the flight by Martin Reese (Mackenzie Gray), a skeptical tabloid reporter, Lil Vaughn (Andrea Martin), an eccentric fashion mogul and Ty ( 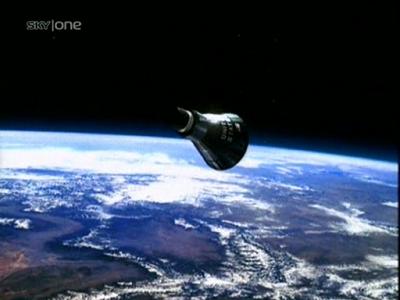